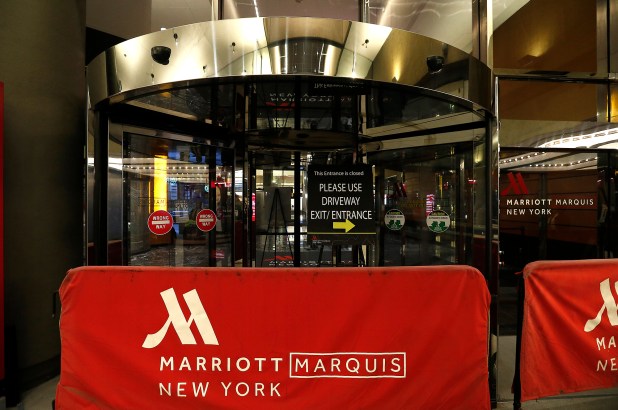 Marriott plans to permanently lay off more than 800 workers at its Times Square hotel as the coronavirus crisis keeps New York City’s hospitality industry in a chokehold.

The 852 workers at the New York Marriott Marquis will be axed for good on March 12 — almost exactly a year after they were put on temporary layoff as the pandemic bore down on the Big Apple, the hotel giant said in a notice filed with the state Department of Labor.

“These are actions we never thought would become necessary at our location,” the hotel’s general manager told the laid-off staffers in a Dec. 9 letter, according to The Wall Street Journal. “The unprecedented severity of the COVID-19 crisis, however, has forced the location to make these difficult decisions.”

The Times Square Marriott initially furloughed 1,265 employees this past March as the state shut non-essential businesses and the city emptied of tourists and business travelers who would normally fill hotel rooms, according to the labor notice.

Marriott did not immediately respond to a request for comment Tuesday, but a company spokeswoman told the Journal that the staffers who remain employed have either returned to work or are expected to come back soon.

The pandemic has kept New York City’s hotel industry under pressure even though officials have lifted some of the strict lockdown measures that were imposed this spring.

Hotel occupancy was still about 80 percent below normal levels last month as the city and state battled an uptick in infections, the Associated Press reported, citing data from the Hotel Association of New York City.

Maryland-based Marriott, meanwhile, saw its net profits for the July-to-September quarter plunge 74 percent to $100 million from $387 million in the same period last year.